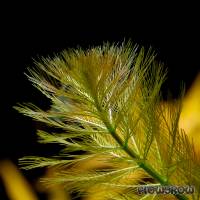 Parrotfeather, or Myriophyllum aquaticum, originates from the south of South America, however, it has been introduced into many tropic to warm-temperate regions of the Earth. This Myriophyllum species usually forms large populations in the water, consisting of long shoots trailing on the water surface. The shoot tips rise above the waterline. The blue-green, finely-structured water-repellent emersed leaves are a typical characteristic of this plant.

It has long been known as plant suitable for garden ponds and aquaria as well, also under the synonym Myriophyllum brasiliense and the vernacular name "parrotfeather".
Several varieties of this species are in cultivation:
- Most frequently in trade: the tall-growing so-called standard form, whose emersed form only forms female flowers. The submersed leaves of this form assume a light orange-brown hue under strong light (see fig. 2).
- The submersed form of another variety, sold under the trade names "Myriophyllum elatinoides" and M. aquaticum "green", has a mainly dark to medium green colour, and only the tips of the leaflets are of a reddish brown. The shoot is narrower than that of the standard form. The emersed plant also develops male flowers.
- A small-staying form of M. aquaticum with pronouncedly dark red stems is often sold as plant for garden ponds.
- Recently, Myriophyllum aquaticum 'Santa Catarina', a local form from southern Brazil, has gained some popularity.

Write Review
or
Upload Images
There are no reviews so far. Do you want to write the first one?
Return to Search
www.extraplant.de
TODO Myriophyllum aquaticum ("Normalform") is also known as Parrot's feather, Brazilian water milfoil and Diamond milfoil. TODO