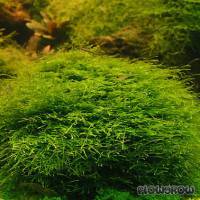 Taxiphyllum barbieri is most commonly called Java moss, and it is the most popular and the most wide-spread aquarium moss there is. Often it is mistaken for Vesicularia dubyana, however, as early as 1982, the moss expert Zennosuke Iwatsuki identified "Java moss" he got from aquarists as Taxiphyllum barbieri. Some years ago, his results were published to a large audience (Benito C. Tan & al. 2004); in this publication, T. barbieri is called Java moss and the real Vesicularia dubyana is given the name Singapore moss.
Unfortunately, the authors were unaware that the original "Java moss" cultivated in Europe over 50 years ago was indeed Vesicularia dubyana and that it was more or less completely supplanted by the faster-growing Taxiphyllum barbieri, which was introduced to the hobby later.
G. Benl introduced T. barbieri in 1969 as "Bogor moss", erroneously under the scientific name of "Glossadelphus zollingeri". It might be better to name Vesicularia dubyana Java moss and T. barbieri Bogor moss, as it used to be. However, to make things even more complicated, Bogor is a city on the island of Java (Indonesia), whereas T. barbieri has only been recorded from Vietnam by botanists.
There might be even more moss species under the trade name of "Java moss", e.g. Vesicularia montagnei, also known as "Christmas moss". The similarity of T. barbieri and Taxiphyllum sp. "giant moss" and with Taiwan moss (Taxiphyllum alternans) is especially striking.

Whichever name it may be known under - Taxiphyllum barbieri has long since established in planted tanks, and for a reason. Its beautiful appearance and its very low requirements regarding water quality and lighting make it a coveted aquarium moss.
Once adapted, T. barbieri grows under diverse conditions. This moss may tolerate temperatures of up to 30°C, however, in cooler water of around 24 °C it grows faster and looks healthier. Whereas it has a more compact, lusher growth under higher light intensities, it is darker and more spindly under lower light. Fertiliser and the addition of carbon dioxide help, but are not necessary. However, if you prefer a lush, healthy-looking moss with strong growth in your aquarium you should at least contemplate the use of an iron fertiliser.

This moss soon attaches to the substrate it grows on with its rhizoids (root-like filaments; the small, hairlike dark brown tufts on the underside of the moss shoots), even on plastic and glass panes overgrown with algae, which makes it very suitable for decorating wood and rocks it can be tied to with the help of a nylon line. A Hamburg mat filter is also a very nice substrate for this plant. It doesn't take long for this moss to cover such a filter entirely, converting it into an attractive feature in an aquarium. It is also possible to create a beautiful moss carpet in the foreground of the tank even if the light intensity is low.

T. barbieri can be trimmed to shape with a pair of scissors without sulking. If it grows too fast you can thus easily control it. Its propagation is as easy - simply cut off a portion. It is also a great hideaway for fish larvae. Mosses have gained popularity in aquaria in the wake of the shrimp boom. They provide these crustaceans not only with protection, but also with a richly laid table as their large surface is home to various microorganisms and detritus.

Write Review
or
Upload Images
There are no reviews so far. Do you want to write the first one?
Return to Search
www.extraplant.de
www.aquasabi.de
TODO Taxiphyllum barbieri is also known as Java moss. TODO