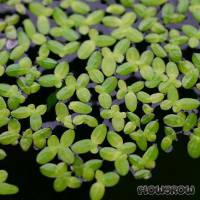 Lemna species, also known as duckweed, grow in stagnant or slow-flowing waters in almost all the world. In most cases they get into an aquarium unnoticed, as hidden in other plants, and once there you won't get rid of them easily.
In the hobby, duckweed is often identified as Lemna minor, however, there are often other Lemna species present, often even introduced from tropical or subtropical regions, which makes identification very difficult. Some species often found in tanks are e.g. L. minuta, L. valdiviana or the relatively large Landoltia (Spirodela) punctata. Quite often, several species occur in the same tank.
Lemna minor, native to Central Europe, does well with very low pH values as well as with very low water temperatures. In winter, this tiny floating plant produces so-called turions (small dense organs containing a lot of starch, which sink to the ground). This strategy ensures its survival during longer cold periods or unfavourable conditions in general.

Duckweed is a very undemanding plant, however, nutrient-rich water and at least medium lighting furthers growth considerably. It reproduces mainly by budding: two daughter plants grow from "bags" on the sides of the plant, which break off early in their development. There's no need to worry about its well-being; on the contrary, duckweed often becomes a major weed due to its smallness, adaptability and extremely fast growth, and you'll rather be busy controlling its population so your aquarium surface is not covered in a solid carpet of duckweed, which would make life for your other plants very difficult as it shades them off totally. Water movement makes this plant even more difficult to control.
You could try netting it off the surface frequently, however, this procedure may take weeks - even the least plantlet you overlook may grow into a large duckweed carpet within a very short time. Some fish - like goldfish and other cyprinids - eat duckweed.

As its growth rate makes it highly annoying and difficult to control as well as its tendency to shade off other plants to a high degree, duckweed is not a recommenable aquarium plant. It may have be of use in tanks whose layout is oriented on natural habitats or for aquariums used for raising young fish, as it provides fish larvae with hideaways, lowers the nitrate level of the water and creates an authentical natural atmosphere with its vertical roots.

There is no detailled information for cultivating this plant yet.
You can embed this entry directly into another web site or forum. Just copy and paste the following code:

Write Review
or
Upload Images
There are no reviews so far. Do you want to write the first one?
Return to Search
TODO Lemna spp. is also known as Duckweed (several species). TODO