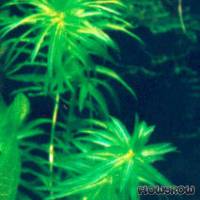 native to Southeastern Brazil; introduced by the water plant trade and established almost worldwide in temperate to tropical areas

Dense-leaved waterweed, or Egeria densa, is one of the most well-known aquarium plants. This submersed plant has spread globally and has been found in several warm waterbodies in Germany, too. However, its origins lie in Brazil, Argentine and Uruguay. It prefers deep, slow-flowing or stagnant water. The hobbyist will probably find this plant in almost any fish store. It is even for sale as a pond plant in garden stores. During the warm season it grows well there, however, it is not reliably hardy in Central Europe.

- leaves only in whorls
=> Egeria, Hydrilla

- leaf margin smooth at first glance (though finely toothed when viewn with a magnifying glass); overall, internodes (bare stem parts between leaf whorls) in the lower (=older) part of the stem are shorter than the leaves
=> Egeria densa

- leaf margin clearly toothed (teeth well visible to the naked eye); overall, internodes (bare stem parts between leaf whorls) in the lower (=older) part of the stem are shorter than the leaves; underside of the leaf midrib without warts or spikes
=> Egeria najas

- leaf margin pronouncedly toothed (teeth well visible to the naked eye); internodes (bare stem parts between leaf whorls) in the lower (=older) part of the stem are longer than the leaves; underside of the leaf midrib often with warts or spikes
=> Hydrilla verticillata

Egeria densa is one of the easiest waterplants in cultivation that can be obtained in the trade. It can either grow as a floating plant or anchored in the substrate. As it does well under almost any conditions it soon starts growing vigorously when placed in an aquarium. It is exceedingly well-suited for enriching the water with oxygen, for binding nutrients and to compete against algae in an aquarium. Colder temperatures and hard water rich in calcium are preferred, however, it tolerates higher temperatures for a short time without stopping growth (if your tank is warm, you might want to consider Egeria najas as an alternative, it tolerates warmth far better). Soft water just slows growth a little. Egeria densa does not require CO2 fertilisation, however, additional CO2 speeds up growth even further.

Propagation is very easy, as in most stem plants. Just cut off a part of the plant, e.g. a lateral shoot, and replant into the substrate. The new plant will soon start growing, too. Lateral shoots are quite common in Egeria densa when kept as a floater.

Keeping E. densa as part of a decorative setup in an aquarium is difficult, however, its exceedingly rapid growth and its low tolerance of higher temperatures are limiting factors. However, if you trim regularly it makes a great background plant whose deep green leaves contrast nicely against other plants.

Can grow emersed?: no

Write Review
or
Upload Images
There are no reviews so far. Do you want to write the first one?
Return to Search
www.extraplant.de
TODO Egeria densa is also known as Large-flowered waterweed, Anacharis, Brazilian waterweed and Dense waterweed. TODO