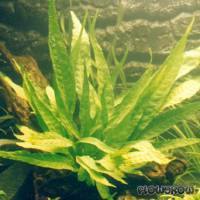 widespread in tropical and subtropical Asia: India and South Japan to New Guinea

Microsorum pteropus, or Java fern, grows in innumerable locations in tropical and subtropical regions of Asia. It is often found on rocks or wood in rivulets and waterfalls. Some populations grow submersed permanently, others occur as terrestrial plants on moist forest ground.
Java fern is a very widely spread, popular plant in the aquarium hobby, and it is on sale in most aquarium shops. 50 years ago it was brought into trade under the erroneous name Leptochilus decurrens, amongst others, which is not a synonym for M. pteropus, but the name of another fern.
M. pteropus is very variable. The various forms can differ so much in size and leaf form that one might even assume they belong to different species. For quite some time, only the large-growing standard form with broad leaves used to be in cultivation, however, more recently, other forms beside the varieties 'Tropica' and 'Windelov' have been imported, a large range of predominantly smaller-growing and narrow-leaved Java fern varieties.

M. pteropus is one the easiest aquarium plants hitherto in cultivation and thus the perfect plant for beginning planted aquarium keepers. Its low demands and the possibility to cultivate it as an epiphyte on rocks and wood made it a firm asset in the aquarium hobby. Moderate light is more than sufficient, Java fern grows well under stronger and weaker lighting as well. Like Anubias, Microsorum pteropus develops a creeping rhizome on which the roots and leaves grow. This rhizome can be fixed to roots or driftwood with string, and after a few months it attaches to these surfaces with its roots. This plant can also be attached to the back or the side glass of the tank with suckers. In breeding tanks, M. pteropus is often used as floating plant, together with Java moss.
If you want to plant M. pteropus in the substrate, make sure you only cover the roots, not the rhizome, as it would rot away. The plant can also be fixed on the ground with plant needles or weighed down with rocks without covering the roots at all.
M. pteropus does not require the addition of fertiliser or CO2, however, moving water is highly beneficial. It can very easily be cultivated emersed in terraria or paludaria, as long as the substrate is kept moist.

Propagation is easiest done by cutting the rhizome apart with a sharp knife or pair of scissors. It can also be broken in two quite easily. In addition, Microsorum pteropus forms daughter plants on the underside and on the tips of its leaves frequently, and also - though less often - on its roots. The development of these daughter plants can be furthered by cutting them off the mother plant and/or by snapping the midrib. Should you plan to let these daughter plants grow on driftwood or rocks, you can just fix "mother leaves" to them with string.
If you leave the daugther plants on the mother plant, in time, a lush population of several plant generations may form on top of each other, which provides fish with a large number of hideaways and territories in its dense foliage and dark tangled roots.

Its ability to grow in places in the aquarium where other plants cannot take root, Java fern provides the aquascaper with many design options. It is especially striking when planted on a piece of driftwood in the middle- or background of a tank.

Write Review
or
Upload Images
There are no reviews so far. Do you want to write the first one?
Return to Search
www.extraplant.de
www.aquasabi.de
TODO TODO