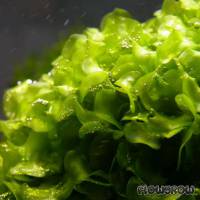 So-called "Suesswassertang", "Loma fern" or "round pellia" is neither a moss nor an algae, but the prothallium (gamethophyte) of a fern. Its carreer in the hobby began when it was discovered by Christel Kasselmann in one of her own aquaria in around 2001. She propagated it and gave parts of it to other aquarists (Kasselmann 2007). Soon this plant spread among hobbyists in all the world. Sellers on the Internet created the botanically entirely erroneous but highly popular name "Suesswassertang". It is unknown where the plant Christel Kasselmann found in her tank originally comes from; it is possible that it was introduced with plants from nature or from an aquatic plant nursery.

In 2007, a team of researchers was able to partially clear up this plant's identity: 97% of the DNA sequences they examined were identical to those of the fern Lomariopsis lineata, which is found in South-East Asia. This was a surprising outcome, as this large fern is not a waterplant at all but grows epiphytic on trees, holding on with its long rhizomes. However, this fern species was also found on rocks in periodically dry rivers. In nature, no prothallia of Lomariopsis lineata have yet been found growing under water, apparently.
According to the DNA analysis, it is possible that "Suswassertang" belongs to the species Lomariopsis lineata, however, another Lomariopsis species cannot be 100% excluded (Li et al. 2009). This is the reason why we call this fern prothallium Lomariopsis cf. lineata in this description.

This fern gametophyt is quite out of the common. So far, no development of sporophyts has been observed, i.e. no young ferns develop from this gametophyte. The plant looks very much like the liverwort Monosolenium tenerum (erroneously called "pellia"). Both plants consists of a branching ribbon-shaped thallus. Sometimes both species are mistaken for each other, thus we'd like to list some of their differences:

- Lomariopsis cf. lineata:
The entire thallus is thin like a membrane (only one layer of cells thick), there is no midrib. Broad round lobes, the tip is never truncate. There are rhizoids (hairlike adhesion organs fulfilling the function of roots) at irregular distances on the underside, also near the margin of the thallus, often in groups. The thallus is more transparent and of a darker green, more flexible and less fragile than Monosolenium.

- Monosolenium tenerum:
The thallus is stronger, more than just one layer of cells thick, with longlish, narrower forking shoots. The tips are less rounded, some of them are trucate. Midrib clearly visible, elevated on the underside, densely covered by rhizoids. In the tissue, oil body cells are visible, as tiny light-coloured (when viewn with incident light) or dark-coloured (when viewn with transmitted light) spots. The plant is very fragile. The branches of the thallus grow upright under low light and develop a very narrow habit.

L. cf. lineata can be used like Monosolenium tenerum, however, compared with that liverwort it has quite a few advantages: the thalli are more stable and sometimes attach to decorative materials in the tank with their rhizoids. The populations grows in a more compact way, especially under intensive light, whereas Monosolenium develops shoots that rather grow to the sides.

References and further reading:
This plant is a part of the following tanks:
There are no further design information for this plant yet.
Add to my stock list
or
Edit my stock list

There is no detailled information for cultivating this plant yet.
You can embed this entry directly into another web site or forum. Just copy and paste the following code:

Write Review
or
Upload Images
There are no reviews so far. Do you want to write the first one?
Return to Search
www.aquasabi.de
www.extraplant.de
TODO Lomariopsis cf. lineata is also known as Lomariopsis prothallium, Suesswassertang, ''Subwassertang'', Loma fern and ''Round Pellia''. TODO