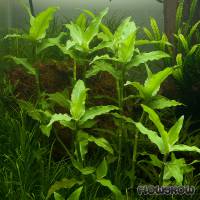 This plant, possibly imported from Asia, probably belongs to the genus Floscopa, considering its flower characteristics, amongst others. It might be Floscopa scandens. Sometimes it can even be found in trade under the name Floscopa cf. scandens, however, for exact identification, further examinations are necessary. What can be said for sure is that is belongs to the Commelinaceae family, which makes it a close relative of e.g. the genus Murdannia, or of Tradescantia, some members of which are well-known houseplants. Up to now, this extraordinary aquarium plant is not very well-known.

As terrestrial plant, Commelinaceae sp. "Green" has upright to creeping stems. When cultivated submersed, its stems are rigid and upright. The leaves are wide lanceolate, without a stalk, up to 8 cm long and 2.2 cm wide. On the stem they form a leaf sheath around 1 cm long, which envelops the stem completely. The stems are strong and grow around 4.5 mm wide. Whereas Murdannia sp. "Red" and Murdannia keisak have their leaves growing in two lines, those of Commelinaceae sp. "Green" grow dispersed around the stem, at least those of the upright shoots. The submersed leaves are of a bright green, have a slightly undulate margin, and their tip bows slightly downward.
The sprouts of C. sp. "Green" remind a little of bamboo or of a knotweed (Persicaria). Emersed and submersed sprouts hardly differ, except for colour: the submersed leaves are of a lighter green.

Submersed cultivation requires strong light, softer water, an acidic to neutral pH, a good CO2 supply and a nutrient-rich substrate. Under low light the plant tends to shed its lower leaves. C. sp. "Green" is a relatively slow grower. If you let it grow to the water surface it will continue growing above the waterline.
Like most other stem plants, it grows an increased number of lateral shoots on trimmed stems. Those can be used as cuttings for propagation. If the plant remains untrimmed, it will develop lateral shoots mainly on the lowermost nodes.
Cuttings ought to be planted in the substrate one by one, with a bit of distance between each other.
Emersed cultivation is easier by far, it can even be kept as houseplant in normal, moderately moist potting soil in a bright place. It seems to bloom under short-day conditions, as it grows inflorescence during wintertime (starting in late autumn), but not during summer. The flower spikes develop on the sprout tips. They are compact and have a relatively large number of small white to pale purple flowers with strongly hirsute stalks and sepals.

The uncommon growth habit of Commelinaceae sp. "Green" probably comes out best in the aquarium if stems of different length are used to form a free-standing group. Its bright green colour contrasts beautifully against a dark backdrop or fine-leaved reddish or brownish plants. It is a great plant for Dutch-style or Tonina-style tanks: Aquaria dominated by Eriocaulacea like Tonina, Syngonanthus and Eriocaulon. In its semi-emersed or terrestrical form it is an interesting plant for paludaria, riparia and moist terraria, too.

There is no detailled information for cultivating this plant yet.
Colour:
light green

There are no images in this gallery.
Add to my stock list
or
Edit my stock list
User
Contact
Trading possible?
Raritätenfreund
Yes
This plant is a part of the following tanks:
Image
Name
Rating

Planted Fish Tank
You can embed this entry directly into another web site or forum. Just copy and paste the following code: