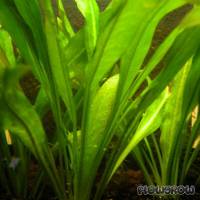 The origins of this Echinodorus are very much in the dark - it may be native to Amazonia, though. Like E. grisebachii 'Amazonicus' and E. g. 'Parviflorus' it belongs to the group of plants related to Echinodorus grisebachii, which is widely distributed in tropical America. E. g. 'Bleherae' was long erroneously known under the trade name Echinodorus paniculatus (and sometimes still is). The true E. paniculatus is a totally different plant not found in the hobby very often.
The different forms of the E. grisebachii group grow amphibic in their specific locations, growing submersed for a long time of the year. They only grow emersed leaves and flower stalks after falling dry during the low-water season. In the aquarium, they also remain below the waterline and only transform into the land form after being taken out of the water.

E. grisebachii 'Bleherae', commonly known as E. bleheri, is probably the most widely distributed sword plant in the hobby and in trade. It is very suitable for aquarium cultivation, grows fast and adapts well to different environmental conditions. However, many people who buy it don't consider the dimensions it can reach when kept in good conditions. Grown plants can exceed 60 cm in height as well as in width, which makes this plant unsuitable for any but very large tanks. Solitary specimens can sprout a great number of leaves and are truly impressive and decorative eyecatchers. An alternative for medium-sized tanks is E. grisebachii 'Parviflorus', which looks quite similar but grows only to about 30 cm in height.

Emersed cultivation is best done in very humid air; like E. g. 'Amazonicus' and 'Parviflorus', E. grisebachii "bleherae" cannot adapt well to dry indoor air like many other Echinodorus species. The land form sprouts flower stalks more frequently than the submersed form. Adventitious plantlets on the inflorescence are a good means to propagate it. Very often, the flower buds do not even open. The flowers are small (diameter of up to 1.5 cm) and have 9 stamina. The most common form of E. g. 'bleherae' is triploid (i.e. has a triple set of chromosome) and thus has sterile flowers, i.e. they do not develop into seeds despite being pollinated.

Write Review
or
Upload Images
There are no reviews so far. Do you want to write the first one?
Return to Search
www.extraplant.de
TODO Echinodorus grisebachii 'Bleherae' is also known as Broadleaved Amazon Swordplant. TODO