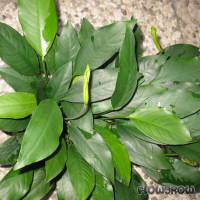 Anubias barteri var. glabra is widely spread in West Africa, from Guinea to Gabun. The plant forms dense populations on river banks and rocks in and on forest rivulets, where they often share the same habitat with Bolbitis heudelotii and Crinum natans.

The variety glabra really is a collective term for various Anubias barteri forms that grow to different sizes, their leaves oval to lanceolate. They cannot always be clearly discerned from other varieties of the species. A. barteri var. angustifolia with its longish leaf blades, e.g., looks rather similar.
Relatively small A. barteri var. glabra plants have been imported from Cameroun under the synonym Anubias minima, they are still carried under that name in trade.

A. barteri var. glabra is as undemanding as var. nana and can be bound to rocks or driftwood as an epiphyte as the latter, or stuck between rocks, attached to the glass with suckers or planted in the substrate. Then the rhizome should remain uncovered.

This plant is a part of the following tanks:
Colour:
medium green
dark green

Write Review
or
Upload Images
There are no reviews so far. Do you want to write the first one?
Return to Search
www.aquasabi.de
TODO TODO