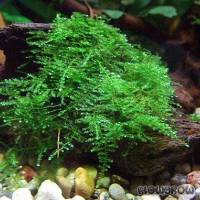 Vesicularia montagnei is a creeping moss very widely spread in the Asian tropics, where it is found mainly emersed, e.g. on moist shaded riverbanks and on moist forest soil.

Its popular name, Christmas moss, refers to its shoots that indeed look a little like the branches of a fir tree. They have a rather regular growth habit and have dense lateral shoots (under low light, this moss does not ramify well, though). Grown "fronds" of submersed plants have a triangular outline and an overhanging habit, however, not as bowed-down as those of Vesicularia ferriei (weeping moss).
The leaves are around 1 to 1.5 mm long and stand at an almost exact right angle to the stem. The emersed form has almost round to wide-oval leaves and an acute, sharp-pointed and rather short tip. Under a microscope, the leaf cells are visible. They are relatively broad (only 2 to 3 times longer than wide) and thin-walled.
In contrast to this, Vesicularia dubyana, although quite similar to V. montagnei, shows an overall more irregular and more loosely branching habit under the same conditions, the leaves tend to be shorter and are narrower, and the leaf cells are more elongated. However, submersed V. montagnei cannot always be safely discerned from submersed V. dubyana.

It is possible that, besides V. montagnei, other moss species from the genera Vesicularia or Taxiphyllum are sold under the name Christmas moss, which also have a feathered growth habit. On the other hand, true V. montagnei is also sold as "Java moss" from time to time. One moss species, allegedly from Brazil, is offered under the term Vesicularia dubyana 'Christmas', in Japan also as "Brazilian Willow Moss". However, neither V. dubyana nor V. montagnei are distributed in South America, at least not as a native plant. However, maybe these names refer to another moss that indeed comes from Brazil.

Based on the fact that other moss species might be present in the hobby, you can understand maybe better where information like the following comes from: It is said that Christmas moss is more difficult in cultivation, compared to "standard" Singapore and Java moss (V. dubyana and Taxiphyllum barbieri) and that it is a slightly slower grower. Indeed, Vesicularia montagnei is about as easy in cultivation as these two species. In the tanks of some ornamental fish breeders it is quite often found under the name "great Java moss". However, under low light it doesn't branch readily. In the aquarium it can be attached to rocks and driftwood with a thin nylon thread. Under moderate to strong light it reaches its full beauty. Very impressive: a moss wall.
V. montagnei can be cultivated emersed on moist substrate and poses interesting layout possibilities for paludaria and moist terraria.
This moss is easily propagated by cutting off parts that then keep growing independently.