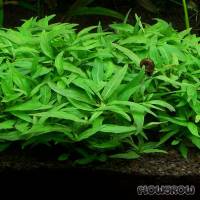 In Contrast to Staurogyne repens (see that plant's profile), Staurogyne sp. 'Porto Velho' is only rarely cultivated in Europe at the moment. In the USA and Japan, however, it is one of the most popular new foreground plants. It is a very attractive, versatile plant and will very probably remain popular for many years to come. Quite obviously, Staurogyne sp. 'Porto Velho' is identical with the aquarium plant sold as Hygrophila sp. 'Roraima', which probably originates from another import. The Brazilian federal states Rondonia (with the capital Porto Velho) and Roraima both are situated in the western part of the country. Thus it is highly probable that these plants, originally collected there, belong to the same species that is distributed in both these states. At first, this plant was considered a Hygrophila species, however, its inflorescence shows characteristics of the related genus Staurogyne.

Under all conditions (not under low light, however) S. sp. 'Porto Velho' has a creeping habit and covers the ground, comparable with ivy, which makes it an excellent foreground plant. When unshaded its otherwise greyish green leaves develop a hint of purple in places. This Staurogyne is a little slower in adaptation but grows increasingly faster after some time, which makes infrequent trimming necessary. Selective trimming of the entire group results in faster growth and is soon made invisible. This method should thus be preferred over the removal of large chunks. This is also a great way of getting cuttings for propagation.

Cultivating this species emersed can be surprisingly difficult. A slow but steady addition of macro- and micronutrients combined with strong lighting, is a must. The emersed form of S. sp. 'Porto Velho' has a wider, more ovate leaf, almost like Staurogyne repens, and a strongly hirsute stem (see pictures 3 and 4).