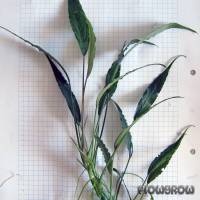 Schismatoglottis roseospatha grows on the banks of rivers and rivulets in the forests of the Malaysian part of Borneo (Sarawak), where this so-called rheophyte withstands strong currents during high water. It forms creeping rhizomes that attach to rocks with the help of their roots, comparable to its relative, Bucephalandra motleyana that is also found on Borneo, and the West-African plant Anubias barteri.
S. roseospatha is not very well-known in the aquarium hobby yet, and it is only available from fellow hobbyists, not in trade. However, this plant was collected as early as in the 1970s by German hobbyists; later on (1988) this species was scientifically described by Josef Bogner.

S. roseospatha has narrow oval to narrow lanceolate dark green slightly shining leaves whose margin is finely undulate. They taper off into the leaf tip bit by bit, their stalks are reddish-brown. The leaf surface is strewn with tiny dots that look silvery under water (possibly the stomata).

Even though this aroid plant is only temporarily under water in nature, it is very suitable for constant submersed cultivation. Whereas the emersed form of S. roseospatha grows up to 24 cm long leaf stalks, its overall height under water remains under 8 cm in most cases.

It can be used similar to the varieties of Anubias barteri in the aquarium - S. roseosphatha can be attached to rocks or driftwood with thread or planted into coarse substrates. The rhizome should remain uncovered then, however. The plant is a very slow grower and its reproduction rate is also rather low. For cultivation, the water should be on the softer side. Temperatures between 22 and 26 °C are recommendable, as well as a good water movement. So far it can be said that S. roseospatha seems to be a very robust plant with little demands on its environment.
By and by, the rhizomes form lateral shoots that can be cut off for reproduction purposes. Rhizome ramification can be furthered by cutting them apart in several places.

Emersed cultivation is rather easy given that the air humidity is high, the substrate is moist and the light is low to moderate. Sometimes it develops an inflorescence then, with a pink spathe, which gave the plant its scientific name.

S. roseospatha is an uncommon and highly decorative epiphytic plant whose distribution in aquaristics should be furthered as it has great aquascaping potential. It stays quite small in its submersed form and grows very slowly, which makes it a good plant for nano tanks. Its leaf form, its creeping rhizomes and its anchoring roots it unites Cryptocoryne-like looks with the growth characteristics and the usages of smaller Anubias species.