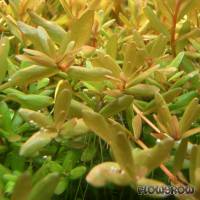 Rotala rotundifolia is a classical aquarium plant, distributed from South over South-East to East Asia, where it is found in swamps, on riversides and in ricefields from the lowlands to a height of 2700 metres above sea level. Rice seeds imported into the Southern US were contaminated with Rotala seeds. Now this plant is also widely distributed there, too.
As aquarium plant, R. rotundifolia was first introduced under the erroneous name of Rotala indica around the year 1960, a confusion lasting to this date and creating possible mistakes, as the true Rotala indica (which differs considerably from Rotala rotundifolia) was also introduced to the hobby several years ago. The latter, however, was first imported under the trade name "Ammannia sp. 'Bonsai'", and, even earlier, due to a mix-up, mistakenly as "Lindernia sp. 'India'".

The inflorescence of the emersed form of the true Rotala indica differs from R. rotundifolia. Whereas R. indica only has individual quite inconspicuous flowers or short flower spikes in the leaf axils along the shoot, the more noticeable flowers of Torala rotundifolia grow in candle-like spikes on the shoot tip.
Its Latin species name rotundifolia means "round-leaved", however, the round leaves that gave the plant its name are only found in its creeping swamp form. The the aquarium, the leaves of R. rotundifolia have an elongated oval or even linear shape.
The submersed as well as emersed forms of the leaves of the true R. indica, though, are spatulate to obovate.
Rotala macrandra and R. rotundifolia look quite similar as emersedemersed flowering plants and mainly differ in some details of the flowers.

Several forms R. rotundifolia can be found in trade, differently coloured when kept at similar parameters. Rotala sp. "Colorata", R. sp. "Green" as well as R. sp. "H'Ra" (= "Gia Lai") apparently belong to R. rotundifolia, too.
The appearance of R. rotundifolia depends very much on the environment it is kept in, which complicates the distinction between the different forms.

In comparison with other species of the genus Rotala it is a rather undemanding plant that does well under medium light. However, it shows its full potential as well as its reddish colour only under strong light (0.66 W/l). Then it may even grow parallel to the ground. The plant displays the most beautiful colours at a low nitrate level (5 mg/l) and high phosphate and iron/micronutrient levels. Varying fertiliser doses bring colour hues from pink to yellow.

The propagation of Rotala rotundifolia is easy: by cuttings of lateral or top shoots that are simply replanted into the substrate. When cut back the plant throws many lateral shoots and grows in a dense bushy form. The same happens when it reaches the water surface. Older stems can simply be replaced by replanted cuttings.

Rotala rotundifolia is best placed in the middle- or in the background of a tank. With its beautiful colour it is a nice accent in a nature as well as in a Dutch aquarium.

During the warm months, Rotala rotundifolia may even be cultivated outside. In temperate zones it may even survive mild winters in a pond.

This plant is a part of the following tanks:
Aquascaping: fine-leaved, forms a grass-like lawn