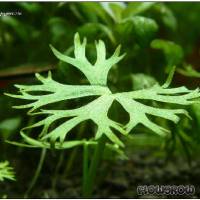 Ranunculus inundatus, or river buttercup, is an amphibic plant originating from south-eastern Australia. There it grows on wet mud or in the waters of ponds and rivers. Ranunculus (buttercup) species are found in many wetlands all over the world, however, R. inundatus is one of the few that grow submersed, too.
Ranunculus papulentus, another Australian buttercup species, and closely related to R. inundatus, is also said to be imported as aquarium plant. However, those plants named R. papulentus in trade do not differ at all from those hitherto identified as R. inundatus. Especially their emersed forms correspond much better to the descriptions and illustrations of R. inundatus than those of R. papulentus (e.g. Flora of New South Wales).

Much like Hydrocotyle and Marsilea species, R. inundatus forms sprouts, either in the substrate or creeping along the substrate surface, on whose nodes the upright leaf stalks and the roots are located. The palmate leaf blades with their forked pinna are characteristic.

To grow to its full potential, R. inundatus needs lots of light. Under low light, it forms long leaf stalks, which gives it a much less attractive overall look. Like most plants requiring strong light, the river buttercup needs around 30 mg/l of CO2 and ample fertilisation. If you keep these things in mind, R. inundatus will develop into a beautiful and attractive plant.

Emersed cultivation is rather easy on wet substrates like loam, and during the warm season it may be kept out of doors, e.g. on the edge of a pond or in containers. Then the plant sprouts small yellow buttercup flowers on upright shoots.

Even though R. inundatus needs quite some time to adapt to new surroundings it picks up growth once it has done so. Then it produces a great number of low-growing lateral shoots that can cover the entire foreground very quickly. It is not a very decorative plant if allowed to grow in crowded conditions. However, R. inundatus looks beautiful when combined with other foreground plants or bordering on sandy, unplanted areas.

Write Review
or
Upload Images
There are no reviews so far. Do you want to write the first one?
Return to Search
www.aquasabi.de
www.extraplant.de
TODO Ranunculus inundatus is also known as River Buttercup. TODO