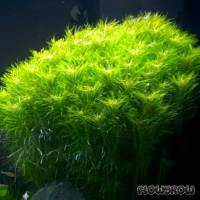 Pogostemon erectus was originally collected for aquaristical purposes in the western Indian state Maharashtra, and it was presented under the erronous name "Rotala verticillaris". During the last years it has been used in many aquaria - mainly in the USA, but increasingly in Europe, too. At first glance, it looks a lot like Rotala verticillaris and some varieties of R. mexicana, however, its submersed growth differs from both by its more strictly upright growth habit and overall larger dimensions. Its emersed form makes the differences even clearer: whereas R. verticillaris and R. mexicana, both belonging to the Lythraceae family, have rather inconspicuous flowers sitting in the leaf axils, Pogostemon erectus, of the Lamiaceae family, shows highly distinct, decorative flower spikes with violet flowers, quite similar to those of the other Pogostemon species known. Moreover, emersed Pogostemon erectus has leaves with an entire margin bowing down. Their form reminds of pine needles. Moreover, it has clearly visible hairs on its stamina. Those are never found in members of the Lythraceae family. Moreover, the areas of distribution of both species do not overlap: Pogostemon erectus is found on the southwestern side of the Indian peninsula, whereas Rotala verticillaris grows on the southeastern side and in Sri Lanka.

P. erectus may not be suitable for no-filter low-maintenance tanks, however, it is not very demanding and won't wither away if provided with plenty of light and CO2. In nature, the plant is also found in brackish areas, and it might be more adaptable than has been thought up to now. Relatively small differences in growing conditions may lead to varying leaf thickness and texture.

In aquascaping, this species is best used in the background of an aquarium. Only in very large tanks it can be used further to the front. If it is provided with limited nitrogen it will develop a moderate growth rate, which is easier to handle, if the nitrogen supply is too high it will grow really, really fast. Its fine light green foliage is especially effective neighbouring red or magenta-coloured plants like Persicaria praetermissa. When the shoot tip is cut off, many lateral shoots are formed, so that the group grows very dense after some time. Then thorough trimming becomes a must.