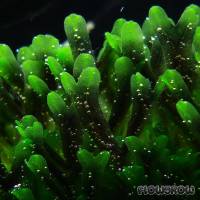 Monosolenium tenerum is a beautiful, dark green liverwort originating from warm-temperate to subtropic areas of northern India, Nepal, Eastern Asia and Hawaii. There it is found on moist, shaded ground rich in nitrogen. It is quite rare in nature but can be more frequently found in settlements. This plant debuted as an aquarium moss in 2002, when it got well-known in the hobby, at first under the (false) name of Pellia endiviifolia. In the following year it was identified as Monosolenium tenerum by bryologist Prof. S.R. Gradstein (Goettingen University).

M. tenerum could be described as a significantly larger, darker version of Riccia fluitans. However, to its advantage, it does not float but remains on the ground, where it forms cushions. Aquarium culture is easy, it thrives under very diverse conditions. Under lots of light and additional CO2 fertilisation it is more robust and looks best. Moderate temperatures and an ample phosphate level also help.

This liverwort species is easily propagated by simply parting the cushions. Its submerse form does not attach itself to surfaces, and may develop into a veritable pest when growing loosely. Thus it is best tied to rocks with a nylon line or tucked between other waterplants. At first it looks less than great when tied to a rock, but after a short time it grows into an attractive tuft which is easily kept in form by trimming. For doing so it is best to take the rock out of the tank, if possible. If you trim inside the aquarium, make sure you siphon the loose ends off. In a shrimp tank, you ought to make sure that there are none in the cut-off tufts, shrimp often sit in Monosolenium.
If Monosolenium tied to a rock is allowed to grow too large, the lowest, oldest parts may die off and the cushion comes off its substrate.

The emersed form of Monosolenium tenerum grows excellently on moist to wet substrates. The emersed thalli grow flatly and get wider than those of the submersed form. It is suitable e.g. for moist terrariums, along artificial water trickles, waterfalls etc.

M. tenerum can be used in quite variable ways in the aquarium and is especially suitable for the foreground and the middle. Its dark green hue forms a nice contrast against lighter-coloured foreground plants like Eleocharis parvula and Glossostigma elatinoides. It also looks good if several tufts of Monosolenium of different size are strewn in between meadow-forming plants. As an alternative, Monosolenium tenerum can be used as a surface-covering plant in the foreground, however, this method is best for large tanks.