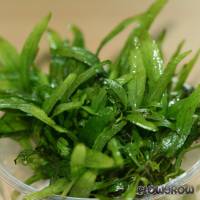 There are several relatively short-growing, narrow-leaved varieties of Java Fern (Microsorum pteropus), among them "Short Narrow Leaf", which was only recently named. The leaves of this variety are usually shorter than those of M. pteropus 'Narrow', they are of comparable width, though. All in all, this is a relatively compact fern with rather thick rhizomes.