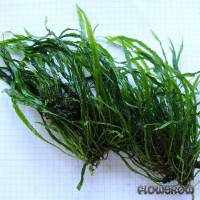 Tropical Asia; no reliable information about the exact origin

The vernacular name "needle leaf" obviously is used for (at least) two similar Java fern forms growing to different sizes. However, both forms alike have exceedingly narrow, band-like leaves of a medium to dark green colour with an undulate margin. The midrib is rather thick in comparison with leaf width, and on the underside of the leaf there are dark brown hirsute scales. The distance between the leaves on the rhizome is rather brief, and the roots remain relatively short.

The larger variety is also known under the name M. pteropus "Taiwan" and (erroneously) as "Narrow Leaf" (not identical with M. pteropus "Narrow" from the aquatic plant nursery Tropica). The leaves of adult plants are usually over 5 mm wide and reach a maximum width of around 2 cm and a length of 30 cm.
The smaller variety, also in trade under the name Microsorum spec. "Mini", has leaves of only 3 to 5 mm in width. This form is an overall slower grower than the first one. Over a long time, the leaves of younger plants will stay around 10 cm long, whereas the leaves of older populations can develop up to 30 cm long leaves.
It cannot be ruled out that there are even more Java fern varieties of the needle-leaf type.

Write Review
or
Upload Images
There are no reviews so far. Do you want to write the first one?
Return to Search
www.aquasabi.de
TODO TODO