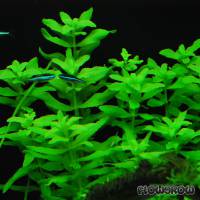 When hobbyists talk about Limnophila aromatica, they usually indeed mean L. hippuridoides, originating from the Malayan peninsula. This plant, often wrongly called "L. hippuroides", has a significantly larger number of leaves per whorl than L. aromatica (6 to 8, sometimes even more). When under strong lights, it is of an intensive, beautiful deep red, with pink leaf undersides.
The real Limnophila aromatica, however, is not very widely spread in the aquarium hobby and its habit and looks are less striking than those of L. hippuridoides. In its submersed form, it has 2-3(-4?) leaves per node. It is a very variable species, there are green forms and those with different reddish hues. As its scientific name suggests, its leaves have a more or less aromatic scent when crushed, as they contain essential oils (most prominently, limonene).
From Taiwan, a variety has been imported that is light green when submersed and that has 3 to 8 leaves per node. It corresponds to the description of Limnophila aromaticoides, which is today treated as a synonym of L. aromatica.

Distributed in tropical and subtropic Asia as well as northern Australia, the rice paddy herb grows in swampy areas or in shallow water, among others it is often found as weed in flooded rice paddies. In Southeast Asia, L. aromatica is used as a spicy herb, and in Vietnam also as basis for a herbal infusion. It is cultivated in flooded fields. In Europe, it is often found as fresh herb in Asian grocery shops. Its characteristic taste can be described as spicy, lively and reminiscent of citrus or curry.

The requirements of L. aromatica as an aquarium plant are more or less the same as those of L. hippuridoides: lots of light, CO2 fertilisation, a good supply of nitrate, phosphate and micronutrients, also in the substrate. Its look depends on the variety. Those L. aromatica plants sold as spicy herb in Asian grocery shops can also be cultivated submersed as aquarium plant. It has relatively wide leaves in whorls of three and is of a light green colour.

Emersed cultivation is most successful in a wet substrate rich in nutrients (e.g. loam), lots of light and a high level of air humidity. When the conditions for the plant are favourable, it brings forth nice flowers in the leaf axils shortly under the shoot tip.