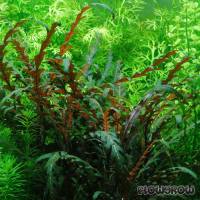 Hygrophila pinnatifida is an uncommon hygro endemic to India. There it grows on rivulets in the western coastal area on the foot of the Western Ghats (Maharashtra, Goa, Karnataka, Tamil Nadu), and in literature, findings of this plant are also documented for the north-Indian state Uttar Pradesh.
H. pinnatifida has been known to science for over 150 years, however, it has only been cultivated as aquarium plant since early 2008. Up to now (2010) it is still relatively rare in the hobby, however, some large aquatic plant nurseries have already taken it into their product range as novelty.

This plant differs from the Hygrophila species hitherto kept in aquaria in many respects. Its leaves of the emersed as well as the submersed form are pinnatilobed to pinnatisect and are thus highly decorative. Furthermore, the submersed leaves have a special colour reminding of some Cryptocoryne species: their upper side is brown to olive green with a light yellowish pattern where the lateral leaf veins fork off the midrib, their underside is of a Burgundy red.
When cultivated submersed, H. pinnatifida develops upright shoots as well as runner-like creeping ones, which can attach to rocks or driftwood with their roots. At the end of these multiply ramified shoots, upright sprouts develop. They can remain rather short for a longer period of time, looking like a rosette then. The stems are of a brown colour and rather tough.

H. pinnatifida does ok under moderate light, however, more intensive lighting helps it grow more compact. A compact growth habit can also be furthered by regularly removing the shoot tips. A good nutrient and CO2 supply is recommendable. This Hygrophila is apparently quite susceptible to a potassium deficiency, whose symptoms are small needleprick-like holes in the older leaves.
The substrate seems to be quite unimportant. The plant forms a rather small, not very deep root system. When pulling the plant out of the ground you will see that the roots attach to sand or gravel grains.

For propagation, the runner-like lateral shoots are best used. It has been observed that top shoot cuttings develop poorly. Those plants that already sprouted roots or plants from emersed cultivation tend to establish faster in the aquarium than rootless cuttings.
The growth rate differs quite a bit depending on the conditions the plant is kept in and its developmental stage. Under moderate light and a limited supply of nutrients and CO2 it grows and reproduces rather slowly, however, under intensive light and an ample macronutrient and CO2 supply, the upright shoots of strong plants may soon reach the water surface. In open tanks, they will probably grow above the waterline and develop flowers after a relatively short time.
On moist substrate, under good lighting and with an ample supply of nutrients, H. pinnatifida can be cultivated emersed. Its emersed shoots grow upright and develop glandular hairs. The emersed leaves are of a medium green hue and grow wider and shorter than the underwater form. When cultivated in daylight conditions, the plants start blooming mainly in spring.

This unique Hygrophila is probably most effective when planted in small groups in the middleground of the aquarium, in front of a calm background, where its special leaf form and pattern stand out best. Especially when the plant grows rosulately stout its growth habit reminds of a fern. The very low-growing plantlets developing at the end of the runners can be planted in the foreground in groups. As H. pinnatifida has a rather dark colour spectrum, neighbouring plants with bright, intensive red hues can easily upstage it.
H. pinnatifida surely offers even more possibilities for aquascaping that have not yet been detected, especially regarding its ability to attach to rocks or driftwood with its roots.