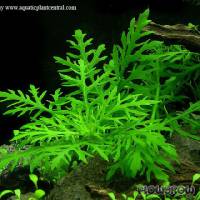 Hygrophila difformis is a very beautiful plant, and has been in cultivation in the aquarium hobby for many years. It originates from South and South-East Asia, where it grows in boggy areas. In Asia the plant is used in traditional medicine.

There are only few plants easier to cultivate in an aquarium than this one. It grows well under moderate light, however, more intensive lighting benefits its health and overall volume. Lots of light, CO2 injection and a good nutrient supply lead to enormous growth rates.
This makes it a great plant for newly set-up tanks, as it can absorb large amounts of nutrients, thus helping to keep ammonium levels down.
Its pinnate leaves grow more refinedly under lots of light. Parameters like water hardness and the pH do not play an important role for H. difformis, and it also grows very fast in tanks with no CO2 injection.
However, micronutrients including iron should be added to the tank, as this plant reacts strongly to a lack of these elements.

The submersed and emersed forms of H. difformis differ strongly (see fig. 5). The shoots of the emersed form creep on the ground, their leaves are unparted, with a serrated margin, and blue-violet flowers develop in the leaf axils. They are covered in sticky glandular hairs and have a strong scent. When planted in an aquarium, these shoots form submersed leaves withing a few weeks, and the old emersed leaves die off.

Propagation is easy, as for most stem plants. Just cut off the upper part of the plant and re-plant it into the substrate. It will form roots very quickly and resume strong growth, whereas the old part you left in the substrate will throw lots of lateral shoots. Frequent trimming will result in beautifully bushy plants.

H. difformis can grow quite large and is thus not very well-suited for smaller tanks. In large aquariums, however, it can be a real plus. Its leaf form makes it a beautiful contrast to other species with differently formed leaves.

Write Review
or
Upload Images
There are no reviews so far. Do you want to write the first one?
Return to Search
www.aquasabi.de
www.extraplant.de
TODO Hygrophila difformis is also known as Water Wisteria and Wisteria. TODO