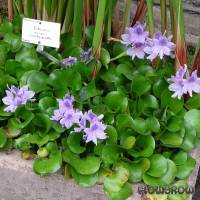 Eichhornia crassipes aka common water hyacinth originates from the American tropics, however, it is now also found in tropical and subtropical areas of Africa, Asia and Australia. It grows in diverse habitats and is even found in heavily polluted rivers, swamps, lakes, and canals. This striking floater has beautiful flowers and grows very fast. It forms large populations in a very short time and in many places it is considered an invasive species whose control is immensely expensive.

Other Eichhornia species are stem plants, however, E. crassipes forms floating leaf rosettes and reproduces by runners. The most striking characteristic of this species are the bloated leaf stalks, forming buoys that keep the plant on the water surface. The flower stalks can comprise up to 35 light purple flowers, the long, densely growing water roots are of a blueish black.

The water hyacinth can be used as floating plant in large open tanks with strong lighting and relatively high macronutrient concentrations. It is highly susceptible to frost but develops very well in garden ponds during hot, long summers, where it may even flower. It is not hardy and dies off with the first frost. A place in full sun, preferrably over loamy ground, and warm, shallow water rich in nutrients are recommendable. Slow growth and light green leaves are a sign of nutrient deficiency or cold. It is also a very decorative plant for mobile containers like watertight pots, bowls or pails on balconies, terraces or winter gardens.