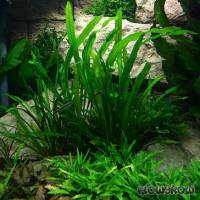 Echinodorus uruguayensis is an extremely variable species with many forms, cultivated in the hobby for many years and under a number of synonyms and trade names, like e.g. E. africanus, E. horemanii, E. veronikae or E. viridis. Strictly speaking, E. osiris also belongs to E. uruguayensis. This plant is readily available in the trade.
The manifold forms of the Uruguay sword mainly differ in leaf length, width and colour. Hues vary from, medium to bottle green, over dark red to even blackish. The leaves of the largest varieties grow to over one metre in length. The forms of E. uruguayensis play an important role in the breeding of Echinodorus hybrids.
All these forms have one thing in common, though: oblong lanceolate to band-shaped, slightly transparent, flexible but relatively robust submersed leaves with an obtuse tip. The leaf blade narrows into the leaf stalk. The unramified flower stalks grow upright or creep, the flowers are comparatively large. The long, thin rhizome grows in the substrate or along its surface and is often ramified. With rhizome growth, the leaf rosette changes its position on the substrate.

E. uruguayensis originates from the southeast of South America and is most frequently found in relatively cool rivers and rivulets with a strong current and acidic water. In nature, E. uruguayensis usually grows submersed and often forms large populations, covering the ground with a network of rhizomes. Sometimes the plant grows long-stemmed floating leaves with an oval or obovate blade. In the aquarium, E. uruguayensis does not grow leaves above the waterline either.

This beautiful rosulate plant requires medium light and a nutrient-rich substrate for fast and robust growth. Slightly acidic water, fertilisation with CO2 and temperatures between 18 and 24 °C also have positive effects on its growth.
Water hardness seems to be more or less irrelevant for this species. However, the reddish and blackish forms require a good supply of micronutrients (especially iron) in order to maintain their beautiful colours. It is possible yet sometimes difficult to cultivate this Echinodorus emersed. Its emersed rosettes stay significantly lower than those of the submersed form. The formation of flower stalks can be furthered by gradually shortening the daily lighting period for the emersed as well as the submersed form.

E. uruguayensis can be kept out of doors at least during the warm season, however, year-round cultivation in a garden pond has been successfully performed in Central Europe e.g. in the plant nursery of Julius Hoechstetter (Trostberg, Bavaria), where the plants that hibernated outdoors flower richly in spring and summer.

Adventitious plants on the flower stalks and lateral shoots on the rhizome are the main ways this plant reproduces. The plantlets can be cut off the rhizome with a razor blade or something comparable. After replanting, they develop into robust plants within a few months given that the conditions are favourable.

Many forms of E. uruguayensis-Formen grow too large for the average aquarium, however, tanks with a volume of 300 litres upwards are highly suitable to cultivate this beautiful plant.
It is a great solitary plant and/or main plant and contrasts very well with reddish or bushy plants.