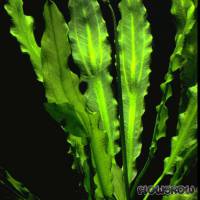 Echinodorus major has usually been called E. martii some years ago, as according to Haynes & Holm-Nielsen (1994), E. major is a synonym of E. martii. Jozef Somogyi (2006) examined the difficult relations between the names E. intermedius, E. martii and E. major and found out that E. major is the correct name for the species we present here. The findings of Samuli Lehtonen (2008) corroborate this theory. However the name Echinodorus martii is a synonym of E. subalatus, according to Lehtonen.
In the US, E. major is also known under the trade name "E. leopoldina", named after Leopoldina Valley, who imported this plant as early as in 1949. This beautiful Echinodorus has been around for many years and is still very popular and readily available in the trade, even though many new Echinodorus cultivars are on the rise.
E. major originates from eastern Brazil where it is found mostly submersed in shallow rivulets. Even though the plant is very common in the hobby, findings in nature are scarce.

E. major is a medium- to large-sized rosulate plant that reaches a maximal height of 60 cm, with a rhizome and light green, translucent submersed leaves with a narrow oblanceolate form. The leaf blade reaches its widest point a little above the middle. The undulate margin and the long narrow lower part of the leaf blade with a round or truncated basis are its most striking characteristics. The first pair of longitudinal veins branches off the midrib near the middle of the leaf blade. The leaf tip is obtuse.
When cultivated in an aquarium, this plant does not form floating or emersed leaves, which is very probably crucial for its continuous popularity as aquarium plant.

A substrate rich in nutrients is of advantage, as well as light intensities of 0.4 watter per litre or above. However, if provided with sufficient nutrients from the substrate, the plant tolerates quite variable lighting conditions. Substrate fertilisation furthers growth considerably and can even trigger the development of long, unramified upright flower stalks with small flowers on short peduncles as well as adventitious plants on its whorls.
It is not necessary to add CO2, however, if done so, growth is enhanced significantly. The plant should regularly be fertilised with iron and trace elements.
It can be cultivated emersed given that the substrate is wet and rich in nutrients, lots of light and a high humidity. The land form remains characteristically smaller than the submersed form, and it forms a widely spreading rosette consisting of oblanceolate light green leaves.

E. major, like most Echinodorus species, tends to outgrow medium-sized tanks. Growth may be stunted a little by taking the plant out of the substrate and cutting back its roots, as well as removing old leaves.
Propagation by adventitious plants on the flower stalks is easy. The plantlets develop better if the flower stalks are kept under water, if necessary, weigh them down carefully. Sometimes, adventitious rosettes form on the rhizome, too. They can simply be cut off with a razor blade or a very sharp knife given that they have gained a certain size.

This very attractive plant is more or less exclusively used in the middleground. Under strong light, it may develop into a beautiful solitary plant, a true eyecatcher. Red plants like Rotala macrandra contrast nicely against E. major. On the other hand, its unique texture and light green colour makes it also highly suitable for an aquarium with mostly green plants.