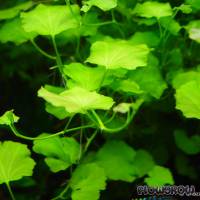 Cardamine lyrata is a bog plant originally distributed in East Asia (China, Japan, Korea, Far Eastern Russia) where it lives in moist places and on rivulets. It is a great plant for coldwater tanks as well as tropical tanks that are not kept too warm, which makes it a very popular, easy-to-obtain aquarium plant.

Japanese cress is a fast-growing creeping stem plant easy in cultivation. Its tendriouls stems carry light green kidney-shaped leaves. Under insufficient light (less than 0.5 watts per litre) the stems grow very thin and the leaves stay significantly smaller. C. lyrata grows well even without the addition of CO2, however, carbon dioxide fertilisation enhances growth. Leaf size seems to be dependent on temperature. Colder water of around 20 °C furthers the formation of larger leaves, whereas temperatures of around 24 °C and over result in tiny leaves.

C. lyrata grows like a climbing plant between all its neighbouring plants. On the nodes it grows roots, which are very often hardly visible due to its dense growth. Propagation is very easy - just cut off a part of the stem or a lateral shoot, which you re-plant into the substrate. This cutting throws new roots very quickly and starts growing.

C. lyrata is highly suitable for creating a visual contrast in an aquarium or as an eyecatcher. Especially in nature aquaria, its climbing growth makes for wonderful effects, as you can let it grow over driftwood or other decorative materials. It is also possible to cultivate C. lyrata as a bush in the middleground, however, in that case it is necessary to trim it often to maintain its form.

Emersely grown adult C. lyrata look totally different from the creeping underwater shoots and look very much like Cardamine species home to Central Europe. It forms 30 to 70 cm long upright stems and pinnate leaves with 2 to 5 pairs of lateral leaflets and a larger terminal leaflet. An inflorescence with white flowers forms on the shoot tip. After the flowers fade, longish flat seed pods form.