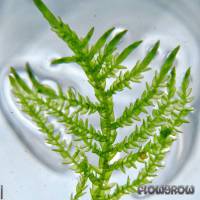 The moss Calliergonella cuspidata is almost globally spread in temperate climates, and it is a rather common moss in Central Europe. It is found in sunny to semi-shaded areas rich in nutrients and bases that are moderately moist to wet, like e.g. in wet meadows, ditches, marshes and on the edges of waterbodies, however, it also occurs quite frequently as "weed moss" in garden and park lawns, especially on compacted soil that tends to get waterlogged.
It is hardly known as aquarium moss at all, however, according to experiences up to now it looks like this moss can be cultivated submersed in the long run, and it is quite a fast grower. In trade, C. cuspidata is probably not available yet, however, it can be found in nature, and maybe even right in your own backyard.

The emersed form of C. cuspidata develops yellowish-green to light green cushions or mats from long, relatively stiff, creeping to upright ramified shoots, on whose end the leaflets fold into a shiny, relatively hard prickly tip. The leaflets themselves are oval to lanceolate, the double midrib is short, but may be missing entirely. The leaf tip looks rather blunt, but tapers off into a short point. In sunny locations, the stemlets are often of a reddish colour.
This moss looks a bit like Drepanocladus aduncus, which also grows in wet places and on the edges of waterbodies, but rather in shallow water. Drepanocladus aduncus can be discerned from C. cuspidata by its sickle-like curved, soft shoot tips that are not prickly at all, a darker shade of green and a distinct leaf midrib that reaches over the mid of the leaf but not to the tip, which can be seen with a magnifying glass.

When cultivated submersed, C. cuspidata has a strictly upright growth habit under lower light, its shoots are less ramified and the leaves are less dense as in the emersed form. If the position of a shoot is changed, the tip will soon start growing upwards again, forming a bend. Under intensive light, it ramifies rather well, and some of its shoots start growing slanted to upright, which makes it look more like the emersed form.
C. cuspidata can be used like other mosses with an upright growth habit, like "stringy moss" (Drepanocladus aduncus). It grows as fast but is overall stronger, stiffer and has a lighter green colour. C. cuspidata can be bound to rocks or driftwood with fishing line et.al., but will not form rhizoids attaching it to the underground. Like a stem plant it has to be trimmed and re-attached from time to time.
All in all, Calliergonella cuspidata is a rather undemanding moss, however, it develops best under strong light, with a good supply of macronutrients and CO2. During the day, lots of oxygen bubbles can be observed between its shoots. It is suitable for coldwater as well as normal warmwater tanks. If it does well in warmer tanks with temperatures above 26 °C still needs to be verified.
This bogmoss might also be suitable for the transitional area between water and land parts in paludaria and Wabi Kusa layouts.

Calliergonella cuspidata easily establishes on wet garden pond edges and in bog gardens, and sometimes even crops up there all by itself. There it grows mainly above the waterline on moist to wet soil, and its thick light green mat-like structures and cushions give a water garden a very natural touch strongly reminding of wild marshland.

Nano Cube 60l
You can embed this entry directly into another web site or forum. Just copy and paste the following code: