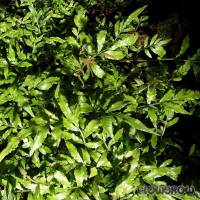 This fern was originally collected on Lamao river on the Philippine island Luzon. First it was described as species in its own right (Bolbitis cuspidata), however, nowadays it is considered to be a dwarf variety of the extremely variable species Bolbitis heteroclita, which is widely distributed in the Asian tropics and subtropics. Large-growing forms of B. heteroclita have long been offered in the aquarium trade, however, they are not suitable for aquaria. In contrast to them, B. heteroclita "cuspidata", which has been in horticulture for many years, has proven to be a very suitable aquarium plant.